You are here: Home / Books / Five Backlist YA Fantasies You Might Have Missed | Novel Newcomers (Kelly from Another Book In the Wall)

This post contains affiliate links, which means if you make a purchase using that link, a small commission is made from the sale. There are no additional costs to you. Thank you for your support!

So uh… I guess I disappeared since the last Novel Newcomers post went live — oops! Actually, I’m not too sorry about disappearing since everyone needs a recharge here and there and it’s perfectly okay to drop off to do so. And I currently need that recharge, even if I didn’t plan on it originally. 😂

Recharging and taking a hiatus means a lot of things, but one of them is more reading time! 😱 With more spare time available, sometimes it’s hard to choose a new book to read (as if it isn’t hard already). Do we choose the book that came in the mail yesterday? The book our friend let us borrow a few weeks that we’ve yet to start? What about the ARC publishing in about a month?

OMG so many choices help.

One of the things I frequently notice in the community is the constant boost for new and upcoming books – we forget about backlist books. Sometimes it’s good to go back to old favorites of readers that were once hyped and give them some love, but with a million backlist books out there, what can we choose??? Kelly from Another Book in the Wall has a few young adult fantasy recommendations that you may have missed when they first came out!

But first, what is Novel Newcomers???

Novel Newcomers is a feature based off features spotlighting debut authors, only with book bloggers! It all began in 2016 with Nori from ReadWriteLove28, started in 2017 but the feature took a back burner later that year and remained so in 2018.

This year, however, Novel Newcomers is back! Clo from Cuppa Clo and I will be featuring book bloggers who started in 2017 OR 2018 all throughout the year, so brace yourselves and let’s get started!  Hopefully, you’ll walk away with more books on your TBR. 😏😈

Related: Meet Lisa from Lili Star Reads or drop by Clo’s blog and meet Charvi from Not Just Fiction!

Thank you so much, Clo and Sophia for featuring me in Novel Newcomers! These two lovelies are some of the sweetest bloggers I’ve ever met, and I love chatting away with them on Discord servers whenever I have a chance! I honestly love them so much, and if you don’t already follow them both, you’re living a sad life, deprived of their wonderful presences.

As an avid reader, I love reading just about anything. It doesn’t even need to be a story. Cereal boxes, billboards, you name it! My eyes gravitate towards words like a child does to ice cream. When it comes to reading, it’s no secret that I am often enamored by shiny new releases. It’s fun to indulge myself in titles that receive significant hype and buzz in the community, but I also have a huge love for backlist novels! So, today I decided to share a list of 5 backlist YA fantasies that you might have missed!

Published by Disney-Hyperion on October 6, 2009

Times are hard in the mountain city of Fellsmarch. Reformed thief Han Alister will do almost anything to eke out a living for his family. The only thing of value he has is something he can't sell—the thick silver cuffs he's worn since birth. They're clearly magicked—as he grows, they grow, and he's never been able to get them off.

One day, Han and his clan friend, Dancer, confront three young wizards setting fire to the sacred mountain of Hanalea. Han takes an amulet from Micah Bayar, son of the High Wizard, to keep him from using it against them. Soon Han learns that the amulet has an evil history—it once belonged to the Demon King, the wizard who nearly destroyed the world a millennium ago. With a magical piece that powerful at stake, Han knows that the Bayars will stop at nothing to get it back.

Meanwhile, Raisa ana'Marianna, princess heir of the Fells, has her own battles to fight. She's just returned to court after three years of freedom in the mountains—riding, hunting, and working the famous clan markets. Raisa wants to be more than an ornament in a glittering cage. She aspires to be like Hanalea—the legendary warrior queen who killed the Demon King and saved the world. But her mother has other plans for her...

The Seven Realms tremble when the lives of Hans and Raisa collide, fanning the flames of the smoldering war between clans and wizards.

I had the great pleasure of reading this one last year and was utterly blown away by its brilliance! The world building, politics, and characters are truly phenomenal. Another aspect I love is that the storyline never feels dense. Rather than drown us in a flood of redundant information, Chima presents a fast-paced plot that never ceases to keep the audience on their toes!

The Scorpio Races by Maggie Stiefvater

It happens at the start of every November: the Scorpio Races. Riders attempt to keep hold of their water horses long enough to make it to the finish line. Some riders live. Others die.

At age nineteen, Sean Kendrick is the returning champion. He is a young man of few words, and if he has any fears, he keeps them buried deep, where no one else can see them.

Puck Connolly is different. She never meant to ride in the Scorpio Races. But fate hasn’t given her much of a chance. So she enters the competition — the first girl ever to do so. She is in no way prepared for what is going to happen.

Maggie is my queen! She is one of my favorite authors in existence, and The Scorpio Races is quite possibly my favorite work of hers. The romance warms my very soul, and the characters and story are beyond beautiful. This is one of those books that resonates long after you’ve flipped past that last page.

Rebel of the Sands by Alwyn Hamilton

Published by Viking Books for Young Readers on March 8, 2016

Mortals rule the desert nation of Miraji, but mythical beasts still roam the wild and remote areas, and rumor has it that somewhere, djinn still perform their magic.  For humans, it’s an unforgiving place, especially if you’re poor, orphaned, or female.

Amani Al’Hiza is all three.  She’s a gifted gunslinger with perfect aim, but she can’t shoot her way out of Dustwalk, the back-country town where she’s destined to wind up wed or dead.

Then she meets Jin, a rakish foreigner, in a shooting contest, and sees him as the perfect escape route. But though she’s spent years dreaming of leaving Dustwalk, she never imagined she’d gallop away on mythical horse—or that it would take a foreign fugitive to show her the heart of the desert she thought she knew.

Rebel of the Sands reveals what happens when a dream deferred explodes—in the fires of rebellion, of romantic passion, and the all-consuming inferno of a girl finally, at long last, embracing her power.

This trilogy makes me want to laugh, and cry, and scream, and sometimes do all three at once. For starters, it has an incredibly unique concept. Imagine a Middle Eastern-inspired fantasy with Western elements. Oh yes, there’s magic and gunslinging, and a healthy dosage of sass to propel the plot forward.

Flame in the Mist by Renée Ahdieh

The only daughter of a prominent samurai, Mariko has always known she’d been raised for one purpose and one purpose only: to marry. Never mind her cunning, which rivals that of her twin brother, Kenshin, or her skills as an accomplished alchemist. Since Mariko was not born a boy, her fate was sealed the moment she drew her first breath.

So, at just seventeen years old, Mariko is sent to the imperial palace to meet her betrothed, a man she did not choose, for the very first time. But the journey is cut short when Mariko’s convoy is viciously attacked by the Black Clan, a dangerous group of bandits who’ve been hired to kill Mariko before she reaches the palace.

The lone survivor, Mariko narrowly escapes to the woods, where she plots her revenge. Dressed as a peasant boy, she sets out to infiltrate the Black Clan and hunt down those responsible for the target on her back. Once she’s within their ranks, though, Mariko finds for the first time she’s appreciated for her intellect and abilities. She even finds herself falling in love—a love that will force her to question everything she’s ever known about her family, her purpose, and her deepest desires.

If I could, I would wipe my memory of this fantastic book from my mind, so that I may experience it again for the first time. I adore Asian-inspired fantasies, and this one is no exception. I loved Mariko as a character and thought the slow-burn romance was tastier than caramel brownies. I would die for this couple. The mutual love and respect between the two characters is simply amazing.

When Alyss Heart, heir to the Wonderland throne, must flee through the Pool of Tears to escape the murderous aunt Redd, she finds herself lost and alone in Victorian London. Befriended by an aspiring author named Lewis Carrol, Alyss tells the violent, heartbreaking story of her young life. Alyss trusts this author to tell the truth so that someone, somewhere will find her and bring her home. But he gets the story all wrong. He even spells her name incorrectly!

Fortunately, Royal Bodyguard Hatter Madigan knows all too well the awful truth of Alyss' story and he is searching every corner of our world to find the lost princess and return her to Wonderland so she may eventually battle Redd for her rightful place as the Queen of Hearts.

This novel sparked my love of retellings. Alice’s Adventures in Wonderland is one of my favorite childhood novels, and Frank Beddor does a splendid job, wielding his own spin on the classic’s many whimsical elements. It’s endearing, violent, and exciting; what more could you want from an Alice in Wonderland retelling? A truly sensational ride from start to finish!

Thanks again to the Sophia and Clo for featuring me! What are some backlist YA fantasies that you adore? Let me know in the comment section! Thanks for reading, loves! 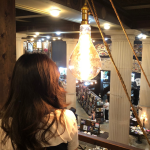 Kelly @ Another Book in the Wall

Kelly is the blogger behind Another Book in the Wall.

This author does not have any more posts.

Signs Your Blog is Evolving

Smoke and Key by Kelsey Sutton | Mysterious and creepy with romance

Lupe is a procrastinator who watches too much YouTube. Sometimes causes chaos in The Sims 4.
Join the bookwyrms