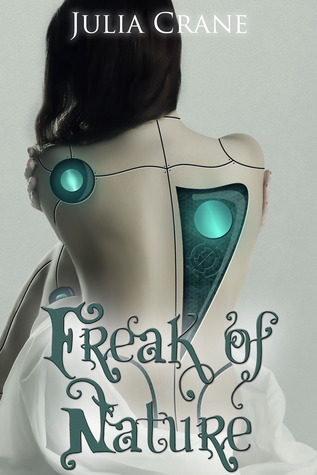 When seventeen-year-old Kaitlyn checked the box, she never suspected she’d have her life–and her body–stolen from her. She awakens one day in a secret laboratory to discover that her body is now half-robot and is forced to hide her own secret: that she still has human emotions and a human mind. If the scientists who made her find out, they’ll erase what remains of who she was.

Kaitlyn finds an unlikely ally in Lucas, a handsome, brilliant scientist who can’t get over the guilt he feels knowing she was once a vibrant, beautiful young woman. He never expected a science project to affect him the way she does. As he tries to help her rediscover her past, he finds himself falling for the brave girl struggling to find her place and acceptance between the human and computer worlds.

Someone once said I’m forgiving when it comes to books. I assumed that meant I should probably be more ruthless – and maybe murder some books – when it comes to the ones I read from then on. You guys have no clue how hard it is to be 100% merciless. 😀

While I might have a high tolerance level, I just didn’t have any patience during the time I read Freak of Nature. It certainly had a great idea – a girl named Kaitlyn had a major accident in which she was supposed to die but came back with a mechanic body with all of her memories gone except for what her creators want her to remember. Sounds like a promising book, right? Other than The Lunar Chronicles – which I need to read sometime in the near or far future – there’s not many books with cyborgs that I’ve heard of or come across. To be honest, I actually thought this would be better than Coexist! But nooooo.

Here’s my biggest problem with Freak of Nature, and really, any other book in general: Thinking about how hot Lucas – Kaitlyn’s love interest – was and how she wanted to tear off his clothes. Sorry for the disturbing image, little peeps of the world, but there’s no doubt they were going to have sex sometime later in the book. I wasn’t going to stick around to see it because I have problems with characters going at it in the first book. Haven’t you guys heard me complain about Maya and Nik in Fire & Shadow? At least they weren’t thinking about sex 24/7 and making things totally awkward.

Actually, let me rephrase that. I don’t really have a huge problem. I do have a problem when said character is thinking about tearing another character’s clothes off all the time, and I quote: “had no idea of her hidden desire to rip his clothes off and trail her lips up the length of his body”. Oh, and she was thinking of having sex with the dude during their first kiss. Um… AWKWARD. When the synopsis said some sexual content, I don’t expect an explosion.

I don’t have dating experience (let’s be Pringles!), but I personally don’t think you should be thinking of having sex with your boyfriend during a first kiss. Really, I don’t. That’s just rushing things (and it’s weird to read about!). Kaitlyn might as well have eloped with Lucas. >_<

Plus, it just stalls things. Not everyone has the patience to wait for the ball to get rolling. And it really doesn’t help when the characters are thinking about – and I repeat – ripping each other’s clothes off. There is no seal of approval from this particular owl. More like a seal of awkward.

In fact, I feel so awkward, I’m just going to wrap this review up. Freak of Nature had a great concept – the instalove though? No. Just NO. *flips hair and attempts to walk away in heels without faceplanting*