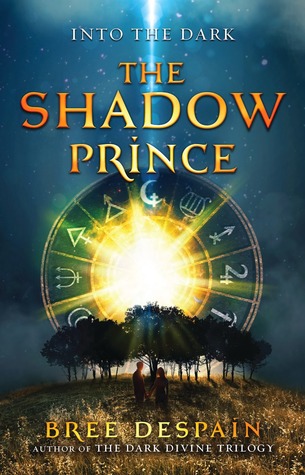 Haden Lord, the disgraced prince of the Underrealm, has been sent to the mortal world to entice a girl into returning with him to the land of the dead. Posing as a student at Olympus Hills High—a haven for children of the rich and famous—Haden must single out the one girl rumored to be able to restore immortality to his race.

Daphne Raines has dreams much bigger than her tiny southern Utah town, so when her rock star dad suddenly reappears, offering her full tuition to Olympus Hills High’s prestigious music program, she sees an opportunity to catch the break she needs to make it as a singer. But upon moving into her estranged father’s mansion in California, and attending her glamorous new school, Daphne soon realizes she isn’t the only student in Olympus who doesn’t quite belong.

Haden and Daphne—destined for each other—know nothing of the true stakes their fated courtship entails. As war between the gods brews, the teenagers’ lives collide. But Daphne won’t be wooed easily and when it seems their prophesied link could happen, Haden realizes something he never intended—he’s fallen in love. Now to save themselves, Haden and Daphne must rewrite their destinies. But as their destinies change, so do the fates of both their worlds.

One of my favorite Greek myths is apparently about Persephone.

I stand corrected – all myths are interesting. Retellings of the Persephone myth is always interesting, but they tend to have one thing in common that has unfortunately slipped out of my mind. I’m surprised I pass some classes with colorful flying sparkles, but maybe I’ll come up with that slippery thought later in the review. MAYBE.

The Shadow Prince, in a nutshell, is essentially a Rumplestiltskinny (NOT a skinny Rumplestiltskin) Greek Myth set in modern day, in which an Underrealm prince by the name of Haden Lord is sent to a little gated up place called Olympus Hills, California to bring back a girl to the Underrealm with him. And yes… Olympus Hills is probably where you would find Justin Bieber should the place exist. Among other celebrities.

I really didn’t have much problem with the book, aside from how it’s a bit too predictable for my liking. It’s either a) Despain is purposely doing this and has something up her sleeve in the future, or b) I’m just too darn good of a detective and should spend my days with Sherlock Holmes or reading a million mystery novels instead of Fantasy and Paranormal. Too bad Sherlock Holmes is from the 1800s – I’m certainly not willing to wear those corsets. They look and sound painful. What do you know – human torture devices made before heels. At least heels you can take off and use as self defense if necessary.

Of course, if Despain really does have something up her sleeve, it had better fantabulous and mind blowing.

What I really had a problem with in The Shadow Prince were the characters, and the romance. I’m not complaining about the romance being too fast – it definitely isn’t. I’m complaining about Haden admitting he loves Daphne after one kiss. ONE kiss and ZERO dates, unless the weeks they spent rehearsing for a festival even counts as a date.

A girl does not simply tell a boy she loves him after zilch dates unless she means it in the friendship manner. But even then, you don’t simply tell that to a person you just met do you?

Second, Daphne Raines is my favorite – not much problem with her. I think she’s a well-developed, thought out character, and is definitely a strong person throughout the entire book. Despite the fact she’s completely freaked out about Haden “stalking her,” she’s pretty calm throughout the whole process.

Unfortunately, Haden is quite depressing – precisely like that one main chick in Incarnate.

“They’re never going to look at me as anything other than the embodiment of disgrace.”

“Ohhhhh. But once a disgrace, always a disgrace! Wahhh!” *mopey little face*

I’m sorry, but for most of the book, all I hear is Haden going, disowned me this, disowned me that. Daddy hates me, the court hates me, everyone hates me, and it’s not until Daphne decides to smack him in the face with a different possibility does he go into my good graces.

Besides, if the almighty papa hated him, why even give a hint of who his Boon is?

And the guy just fails at blending. Like Daphne says, he sounds like Thor. In my book (I’ve never seen Thor), it means he sounds like an overly formal dude reserved for gentlemen of the olden days.

“I have agreed to sing during the festivities of lighting up Olympus. I request that you help me prepare. Or perhaps a duet would be prudent.”

Impressive, Haden. Yet not impressive.

There’s also Joe Vince, the so called celebrity and Daphne’s dad. He doesn’t even sound like a celebrity. He’s like Haymitch who’s basically famous and just called “God of Rock.” I’m sorry, but he’s drunk throughout 99% of the book, and I just don’t buy his celebrity status.

Despite my problems with most of the major characters and predictable radar, The Shadow Prince will most likely be a good read for the romance and possibly a few myth fans out there.

I suppose I’ll take my chances with the sequel. It’s questionable.

One response to “Review: The Shadow Prince by Bree Despain”